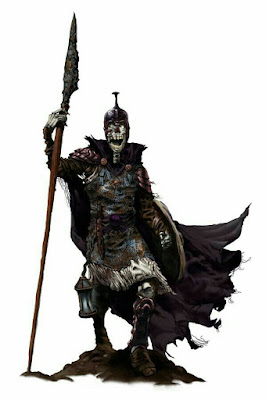 (I found this on pinterest unfortunately, and couldn't find the source, if anyone knows where it is from, please let me know in the comments!)

Today's dungeon is based on my own idea, since I've run out of requests, but since this blog tends to focus on the usable rather than the imaginative, said idea is "a tomb with some undead and treasure in it". I'm also gonna experiment with a different layout for this post.

But before that, here is a 30 minute dungeon made by someone else!
https://drive.google.com/file/d/1batSQzURoCboa5CG2FZQchMgq11c5uOh/view

Hook
The local church has found evidence that the body of a Saint Jonathan was interred in an ancient tomb not far from town. Retrieving the saint's body would be a great boon to the local economy, as pilgrims from elsewhere in the nation would travel to see the relic. The local preacher has tasked you with retrieving the corpse.

Background
The tomb is ancient, dating back to the very early bronze age. Saint Jonathan was killed in battle over a hundred years ago, but his body was hidden in this tomb in order to ensure it wasn't desecrated. Unfortunately, owing to the interred mummy of a foul necromancer, the dead walk in this place, suffused with unholy power by her dead body.

Skeleton Warriors
The clatter of bones and armor greet your ears, before you is a group of animate skeletons, moving like puppets controlled by some demoniac force. They wield ancient, rusted weapons and are dressed in crude armor.
The skeletons are simple, nearly mindless monsters, and will fight to the death. They do retain a modicum of tactical sense from life, however.

Mummified Slaves
A large group of shriveled, emaciated figures move around the room falteringly, groaning and moaning in dry, desperate tones.
These are the re-animated corpses of an ancient king's slaves. Through their transformation, they have been reduced to mindless husks, and the hunger for the blood of the living.

Composite Corpse
A massive, metal coffin is in the room's center, bound by chains.
If the coffin is approached, it will suddenly burst open, the centuries-old chains being snapped by the sheer brute force of the necromancer's last, and most deadly creation. The creature interred within it is a hulking abomination created by suturing together dead flesh, and empowering it with unwholesome potions and incantations. It lives, fights, and dies to protect the tomb of its mistress, though there is a magic word which can be spoken to calm it down. However, the only one who knows the magic word is the necromancer herself, whose spirit can be talked to via ouija board in the NPC room.

Treasure Room With Spear Trap
Clay jars filled with jewelry and cold coins immediately grab your attention, shining in the light of your torches. At the far end of the room is a stone chest.
If the chest's lid is removed, a spring fired spear will shoot out of it, impaling whoever tried to open it. However, within the chest, in addition to the trap, is a talisman carved from ivory on a fine gold chain. Anyone who wears the talisman is granted with supernatural good luck for a limited amount of times each day.

Poison Darts
The hallway is empty, simply leading on into the next room. There are unusual holes in the walls on either side.
Pressure plates in the floor will cause poison darts to be fired from the holes in the walls if stepped on. The poison results in temporary blindness and horrible pain, resulting in screaming that attracts monsters, but is not deadly.

Funerary Urns
Clay jars, decorated with images of human faces, sit on stone shelves carved into the walls.
The urns are filled with a fine ash, though some contain small amounts of gold or perhaps a jewel.

Empty Grave Niches
The room appears to have been used to store human corpses, judging by the niches carved into the walls. However, every single one is empty.
Faint footprints can be seen in the dust on the floor.

Holy Sarcophagus
An intricately carved sarcophagus dominates the room. Next to it lies a pile of old bones, including a crowned skull.
Contained within the sarcophagus are the remains of Saint Jonathan, the bones on the floor next to it are those of an ancient king, whose body was removed to make way for Jonathan's.

The Mirror Of Untimely Demise
The room here is utterly empty, save for a tall, beautifully polished mirror. One of you does not appear in its reflection.
Whoever has the lowest HP of the group that looks in the mirror cannot be seen in its reflection.

The Ouija Board
The room you enter is filled with cobwebs and dust. On a platform in the center of the room is a rusted metal sarcophagus, with letters and numbers inscribed on its flat surface. A planchette rests on it.
By having two or more people hold the planchette, the ouija board atop the sarcophagus can be used to communicate with the mind of the long dead necromancer. She is bored, lonely, and sarcastic. Her name is Avendri.