So lets say you're playing JABOM (my house rules), or OD&D, or some other system where what weapon you're using doesn't matter that much, and you're just gonna deal 1d6 damage or so anyway; what is your motivation to choose one weapon over another? And if there is variable weapon damage, why not just choose the cheapest one that deals the most damage?

It all comes down to other factors, such as "Can this weapon be used for things outside of combat?", "How easy is it to hide?", and "How hard is it to carry around?"

For example, a flintlock pocket pistol in my house rules is treated as a light ranged weapon, dealing 1d6-1 damage. In theory, its basically the same as a sling, just fancier. But the pocket pistol is not able to use improvised ammunition, like rocks you just find lying around in the case of the sling, it requires less space to operate, and it is a lot louder. Shooting someone with the pocket pistol is more likely to attract attention than launching a ball bearing at them. 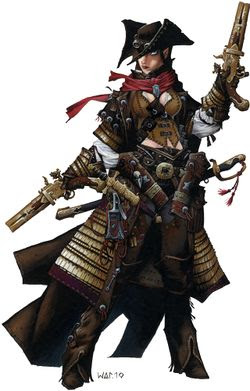 As another example, using a polearm would probably do the same amount of damage as a greataxe (1d6+2, if both are assumed to be heavy melee weapons), but again, there are several obvious differences between the two. A polearm could be used like a long pole to deactivate traps at a distance, the blade could be removed and it could be used for pole vaulting, and if you really wanted to you could cut down the hilt a bunch and maybe make it into a 1 handed axe. Meanwhile, a greataxe requires less space to swing, as it is smaller, could be used for chopping wood in a pinch, and could more easily be strapped to one's back.

Distinguishing weapons shouldn't necessarily have to be done through complicated combat statistics, all it does is slow down character creation and combat by adding in modifiers and exceptions to rules. Instead, let players use their imagination and apply simple logic to the game world in order to flesh out their equipment. 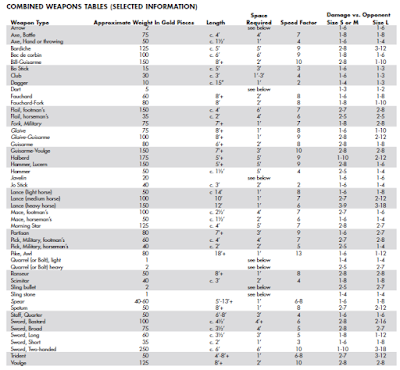 Posted by Tristan Tanner at 9:57 PM