30 Minute Dungeon: The Crypt Of Radok The Cruel 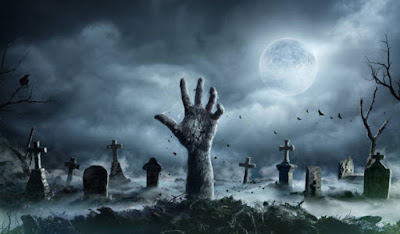 (This is me right now)

Hey, I'm still alive. I haven't been posting much because of general stress combined with me being quite busy. My initial goal of posting a dungeon a day was far too optimistic for what I'm capable of right now, with a real job and college. But, I don't want this blog to fall by the wayside, and I still love D&D, so lets make a dungeon.

Hook
There have long been tales of a buried sorcerer and his treasure in the hills, but they have never been substantiated until now. A local explorer trekked inside, and brought back a centuries old golden coin.

Background
Centuries ago a powerful sorcerer wandered the lands, plundering and killing as he willed, and he amassed a following of impressionable young occultists. This spellcaster was named Radok the Cruel, and by the time he retired, he had gathered a large amount of treasure. But Radok was dying, he had spent too much time adventuring and performing black magic in his youth, and now that old age had taken him, his body was beginning to decay at a rapid rate. He ordered his followers that he be buried, along with his treasure, in a tomb in the hills.

Giant Spider
Cobwebs cover almost every inch of this room, some sheets are thin as fine silk, but others are vast ropey masses of sticky fiber.
A pale white giant spider lurks among the web, waiting for victims to move closer. A skeleton, wrapped in web, can also be found in this room, with a pouch containing a few coins.

Undead Bandits
Around a wooden table are seated several human corpses, long since desiccated and mummified. The table has a small pile of coins and jewels on it.
If the treasure is touched, the corpses spring to life and attack.

Animated Statue
An easel stands in front of a beautiful statue of a goddess. On the easel is a canvas, on which is drawn the sketch of the statue before it.
The sketch depicts the statue in a different pose than it currently is. The statue is animated, controlled by a bound demonic spirit, and will attempt to slay the interlopers when given the chance.

Incense Of Eternal Slumber
A delightful perfume pervades the air of this rather fancy and comfortable looking room. There are cushions and blankets strewn about, and a table in the center has several candles on it. Some figures in the room appear to be sleeping peacefully.
The perfume dulls the senses, and makes anyone who enters feel relaxed and sleepy. It even has a minor hallucinogenic effect, requiring some effort to realize that the sleeping figures are rotting corpses. Anyone who falls asleep in this room will never wake up unless they are removed from the room.

The Gorgon's Book
This room is cramped, and contains only a small lectern and a lantern next to it. Atop the lectern is a closed leather-bound book.
The book is both a deadly trap and a potent magical weapon if its power is discovered. Anyone who opens the book will see remarkably lifelike portraits of gorgons drawn on every page. Nobody who sees the true face of a gorgon can continue to live, and will turn to stone unless they manage to look away before viewing the creature's form.

The Fountain Of Wine
A fountain bubbles and splashes in this room, spewing forth a translucent red fluid that smells faintly of grapes. The walls, floor, and ceiling are decorated with mosaics of a vineyard.
The fountain is magical, and ensures that the wine flowing through it remains potable and delicious. The wine can be bottled and sold for significant profit, though there is a limited supply.

The Art Gallery
Dozens of paintings of a stern faced man with a black goatee stare down at you from the walls.
The paintings are all portraits of Radok the Cruel.

Taxidermy Room
Several stuffed predatory animals are arranged in threatening poses in this room, including a bear, a lion, and a wolf.
All of these animals were, in life, the pets of Radok the Cruel.

Random Telepad
A circle of white light glows in the stone floor, surrounded by curious arcane symbols.
Anyone who steps in the circle is teleported to a random room in the dungeon.

Radok The Confused
Before you, on a throne of carved stone, sits an evil looking man with a black goatee, dressed in fine red robes.
This is a holographic projection of Radok the Cruel. It fully believes it is the man himself, and does a very convincing job at acting the part. However, it cannot cast any spells (though it will threaten to do so), and doesn't actually know that much about Radok's life beyond the basics. The real Radok is dead, the throne being hollow (there is a way to open it around the back) and containing his mummified corpse. The corpse is wearing red robes of the finest quality, and is buried along with piles of coins and jewels. 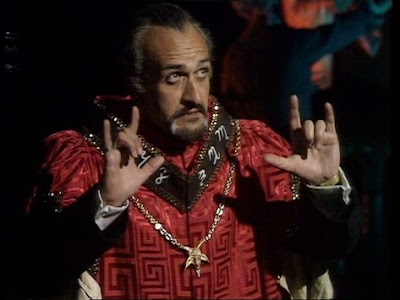 (This is the kind of vibe I'm going for. Picture is of Roger Delgado as The Master in Doctor Who)
Posted by Tristan Tanner at 2:29 PM