Right so everybody on my blog should know about my 30 minute dungeon formula, but if you don't here is a brief recap:

Based on my experience as a dungeon master, I find that the perfect ratio of rooms in a dungeon is as follows:

Which, in practice when it comes to making a quick dungeon in 30 minutes, is 3 combat encounters, 3 empty rooms, 2 traps, an NPC, and something weird to fiddle with. Also one magic item, thrown somewhere in there.

Now this is all well and good but I've found myself realizing that even I didn't really full "get" what made a good one of any of these archetypical rooms in a dungeon. What separates a good trap from a bad trap? When is a combat encounter just a boring die rolling competition, and when is it tactical and neat? How do I a huge dumbass write interesting characters?

Here is what I came up with to answer these sorts of questions:

What does a good combat encounter need?

(This is taken from the Wolfenstein 3d mod Medevil, and I think this forms the basis of a neat combat encounter. There is a table in the middle that acts as cover, two different enemies with unique tactics and strategies. If this were in a D&D game, the players could even utilize the tapestries on the wall to their advantage, maybe throwing one over an opponent to blind them!)

What does a good trap need? 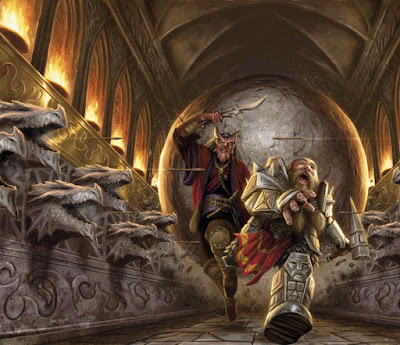 (I love this illustration from D&D 4th edition, its a little bit over the top for my taste but this image of the adventurers fleeing from a huge boulder while being shot at by arrows is so cool)

What does a good empty room need?