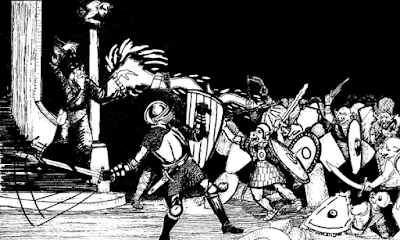 (From Holmes Basic, I believe)

Orcs have been seen wandering the wilderness! You have heard tales of their cruelty and monstrous capacity for violence, and from the looks of it, these ones are armed for war. A few remote hermits have had their shacks burned to the ground and their livestock ripped to shreds, though some survivors claim that it wasn't the orcs that killed their livestock, but something horrible that travels with them, The orcs seem to have made their lair in a nearby cave.

A warband of orcs called the Rusted Teeth are camping out in a cave, leaving by night to raid and pillage. They are small in number, but have an enslaved troll which they use to make up for it. A farmer named Frederick has been kidnapped by the orcs.

Orc Guards
Some orcs stand watch, clad in armor made from stitched together leather and rusted steel. One of them wields a heavy crossbow, while the others are equipped with spears and shields.
The orcs with spears and shields will attempt to protect the crossbow wielding orc. If any of the orcs are killed, one of the remainder will flee to the barracks to alert the others.

Barracks
It smells like a pigsty in here, and it isn't much cleaner. A number of orcs lie sleeping on cots, while a few sit gambling on a fight between beetles.
As soon as the orcs notice the party, they will awaken the sleeping ones (including their leader, Balfrug. Alternatively, the death rattle of one of them may awaken the sleeping orcs, if they don't have time to react. The orcs will try to use their cots as cover, and wield a variety of weapons, such as crossbows, pikes, slings, and axes. There is a chest in the corner full of the gold the orcs have looted.

Troll Lair
Before you stands a huge, monstrous humanoid, covered in cancerous growths and cysts. It reeks of rotting meat, and it has a strange silver collar around its neck, covered in mystic symbols. Stalactites hold up the ceiling.
The troll is wearing a magical collar, stolen by the orcs, that makes it susceptible to the commands of the one who put the collar on it (Balfrug). The troll is under standing orders to kill anyone who isn't part of the Rusted Teeth warband, and it will follow this order without any care for its safety or survival. The troll may try to break the stalactites in the room to bring down the ceiling. If the collar is removed the troll will be grateful, and will flee into the wilderness. The magic collar can be re-used by the party.

Bear Traps
It looks like there was a fire in this room. Piles of ash, bits of burnt wood, and a few small piles of oddly unburnt leaves cover the floor, and drawn on the wall in charcoal are crude images of murder and destruction.
Hidden under the leaves are bear traps. A golden amulet, dropped by one of the orcs, lies hidden under the debris.

Tripwire Bucket Of Oil
There seems to be some spiderwebs in this room, including a long thin strand across the floor, numerous cobwebs, and a funnel web in the corner.
The long thing strand of web is actually a tripwire, and if activated, a bucket of oil will fall on the triggering character's head, coating them from head to toe. The bucket, upon hitting the flint stone floor, will make a spark, causing the character to go up in flames.

Hanging Animal Skins
Hung up on the wall are a number of animal skins. Some are crudely sewn back together, as if they were torn apart before being hung up.
These are the skins of the animals killed by the troll. The orcs intend to use them as clothing, once they are sufficiently dried out.

Shrine To A Pig Demon
A small statue of a pig-like humanoid sits in a niche at the end of this chamber.
This is the object of worship for the Rusted Teeth, and represents a grotesque swine deity to which Balfrug has pledged himself. The other orcs will be fearful if the statue is threatened with destruction by the party, believing destroying the statue will release the demon to slay them. This is just a lie told to them by Balfrug in order to maintain fear.

Latrine
It smells disgusting in here, and you can soon see why. A vile puddle of urine with piles of feces nearby show that this is where the orcs "take care of business".
Human teeth can be found in the feces, including a gold tooth.

Stairway
In stark contrast to the rest of the cave's natural form, a set of cut stone stairs lead down in this room. You cannot tell how far it goes.
The staircase descends down several miles, all the way down to the underworld. The orcs avoid this room, for fear of the what might come out. Strange whispers and unfathomably alien sounds can be heard emanating from the stairway if one listens long enough, beckoning the listener to descend down into the depths. After a while, these noises can put a listener into a mindless trance, compelled supernaturally to go down the stairs.

Kidnapped Farmer
A skinny, black haired young man with soft brown eyes is tied up with rope, next to a bucket of dirty water. He is gagged with cloth, and struggles when he sees you.
The man's name is Frederick, and he is a simple farmer who was kidnapped by the orcs. He was to be made a meal for the troll, but he managed to convince the orcs that he knows where some great hidden treasure is. He claims that he cannot tell them until the full moon (which is in 3 days), for he has a secret treasure map tattooed onto his skin that is only visible by the light of the full moon. None of this is true, Frederick is just a very good liar and desperate to not be eaten.
Posted by Tristan Tanner at 8:53 PM