A weird surreal funhouse dungeon, just to get back into the swing of things. Some parts are a bit wonky, I'm out of practice, things have been busy and out of hand this past month. 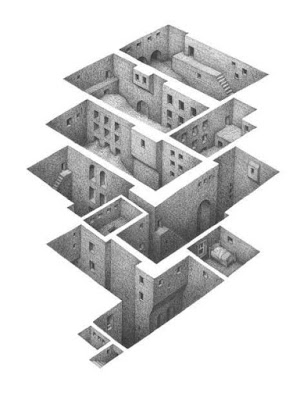 Deep in the woods where few people ever go is a twisted labyrinth of white stone. It has been there as long as anyone can remember, and it is rumored that it comes from a time before humans walked the face of the world. The maze normally has no entrance, and anyone who has tried to climb over the labyrinth's walls has never returned, but rumor has it that once every 300 years it opens; that time is tonight. What secrets could this unearthly place hold?

The White Maze is a strange structure built by faeries eons ago. Its original purpose is unknown, but the maze has strange properties beyond mortal understanding. For one, the maze occupies less space than it should physically be able to, and for another, time doesn't seem to pass the right way there, and creatures from the past or future can be found wandering its halls.

The Dwarves
A group of naked, hairless dwarves occupy this "room" of the maze, sharpening weapons of bone, hair, and white stone. They have a wild look in their eyes. Various pieces of furniture crafted from similar material to their weapons are scattered across the room.

These dwarves have been trapped here for centuries, and have since lost their minds, plucked out all their hair, and begun to worship the maze, hunting down others who wander its twisted halls. Their leader wields a weapon imbued with unnatural blood magic, an axe with a head made from a human jaw. This weapon causes the user to feel intense euphoria and regenerate wounded flesh whenever they take a sentient being's life.


The Blind Dragon
There is a vaulted roof to this area of the maze, and as such it is shrouded in darkness.

Within this room is a dragon, blinded and with its wings removed, but a dragon nonetheless. It rests on a mound of coins and gems, waiting for prey.

These orcs have been maintaining a constant war with the naked dwarves, but are at a standoff. Unlike the dwarves, they can be reasoned with, though they are quick to stab their "allies" in the back. Their leader is called Gnarlash.

Invisible Bridge
There is no ground here, it is simply a hole that descends ever deeper into the ground, with no bottom visible.

There is an invisible bridge with several holes in it that crosses the gap. It can be founding by pouring sand or placing objects on to it. Anyone who falls into the pit and fades from sight is lost forever.

Floating Blades
A horrific tinnitic buzzing like that of millions of bees fills your ears as you enter this part of the maze. Rotating blades of shining silver spin at various heights and angles, floating in midair. There are gaps between them, but one must be very careful to avoid injury.

The blades are made from pure silver, and if somehow disenchanted could be sold for quite a profit.

Warning
"This is Hell" is written on the wall in an oily black substance.

The substance can be collected, and is highly flammable, usable as a fuel source for lanterns.

The statue's eyes are expensive pearls

This is the sole source of food and water in the maze, and it is magically cleaned and replenished every sunrise.

Healing Amnesiac Mist
A mist rises from the floor, obscuring everything in this part of the maze. It seems you are in a wide open area.

The mist causes vivid hallucinations, which are designed to try and lure anyone who sees/hears them to go further into the mist. If one does go, they will disappear, only to reappear elsewhere in the maze with no memory of what occurred and full health.

The Prisoner
A man in a gray robe lies on a bed, sobbing.

The man has been trapped here for so long he doesn't know his own name. He wants out of the maze, but can't remember how he got in. He does know that once you enter the maze, if you don't get out in time you will be trapped forever, unless you can find the way out 300 years later. Aging doesn't happen in the maze, so although he is ancient, he appears to be in his 40s.
Posted by Tristan Tanner at 9:00 PM