The Rod Of Heavenly Lightning (And Pigs)

Blogger's Note: Holy shit this post has been in my drafts for far too long, I'm gonna finish it up and post it now. 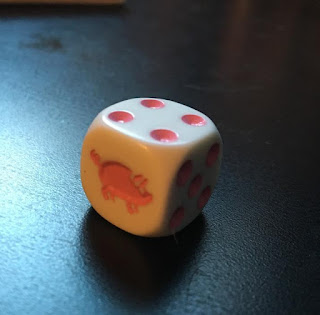 Loki (my fiance who I love very much) came up with this idea based on this die which e gave me for Yule.

The basic premise of the weapon is simple: are you feeling lucky, punk?

The Rod of Heavenly Lightning (and pigs) is a metal staff with a button in the middle. A hexagonal prism of pink crystal adorns the top of the staff, with 5 faces depicting a lightning bolt, and 1 depicting a pig. When the button is pressed, roll 1d6. On a 2-6, the wielder conjures forth a lightning bolt, dealing [Wielder level]d6+3d6 damage to anyone within line of sight. On a 1, there is a puff of smoke, the Rod clatters to the ground, and the would-be magician is transformed into a pig.

The pig retains the INT, CHA, and WIS scores they had before their transformation, but their DEX, CON, and STR become 8. In addition, the victim no longer has opposable thumbs, the ability to wear armor, the ability to cast spells, or the power of speech.
Posted by Tristan Tanner at 7:29 PM

Email ThisBlogThis!Share to TwitterShare to FacebookShare to Pinterest
Labels: Loki <3