(I think this is from Holmes Basic)


I got bored of waiting for a good opportunity to run a game for other people, so I decided to run a game for myself. It is completely off the cuff, using random tables I made along with a heavy dose of improvisation. I rolled up 4 player characters, gave them some background and personality, then dumped them into the completely improvised dungeon. This session was short, around an hour I believe, and I hope to continue the adventure soon.

Hopefully by the end of this, I will have a dungeon map and key that can be shared so all of you folks can use it!

Heck, when I conclude the journey maybe I will share how I did it, so y'all can try it out!

Former follower of the Empire, acting as a body guard for inquisitors, before witnessing atrocities committed by the inquisition against suspected witches. In that moment, she felt that she could no longer support her government. She slew the inquisitor responsible while he slept, and then went off into the night to fight evil.

Born in Faithhold, the Imperial capital, and made a living on the streets doing petty burglaries and participating in gang warfare. She eventually was wanted by the Order of Justice for her crimes, and fled the city in search of fortune elsewhere.


A dwarf priest of Hurngar (a Dwarven god of volcanoes and fire) from the Northern kingdom of Imor, Delfee headed South to the Empire by boat to visit her brother, only to find that he had been executed by the Imperial government for openly worshiping Hurngar. She is now determined to raise up enough funds through adventuring to overthrow the government that killed her brother.

Anna was raised by her grandmother in the woods, and learned the art of magic from her, far from the prying eyes of civilization. Eventually, her grandmother died, and Anna left the small cabin into the wider world, where she found suffering, intolerance, and pain. She wants the world to be a better place, and endeavors to do so by acquiring treasure and distributing it to the less fortunate, as well as stopping any evil that gets in her way.

The Adventure So Far

Our party has recently heard rumors of an ancient underground complex known as the Tomb of Unrelenting Hatred, supposedly home to monstrosities and treasure beyond imagination. So, led by Sylvia with Delfee close behind her, the intrepid adventurers descended down the tunnel into the depths of the tomb.

A fork in the path appears, and the party chooses to go West instead of East, arriving at a room with a stone sarcophagus. Atop the sarcophagus was a beautiful jewel, which Martha quickly extracted using a hammer and a stake as a rudimentary chisel. Delfee used her great strength to wrench open the coffin, and found within a perfectly preserved old woman. Convinced the crone couldn't be dead, she lifts the body out of its receptacle, and it quickly dissolves into naught but dust.

Shaken, but not deterred by this unsettling event, the party continues North through a door in the burial chamber, finding a small storage area filled with urns and pots and a small wooden chest in the corner. Martha opens the ancient box to find 600 old coins, each one stamped with a skull.

Once again the party had a choice of where to proceed, for a corridor led further North while a closed door led West. After deliberation, the party opened the Western door, with Sylvia in front.

They opened the door only to encounter a horrific beast crouched among the bones of the long dead! It was nearly naked, save for a loincloth, completely hairless and resembled a human in general shape, though it had a wolf-like head and sharp claws. On its face was a golden deer mask, mercifully obscuring most of its facial features. 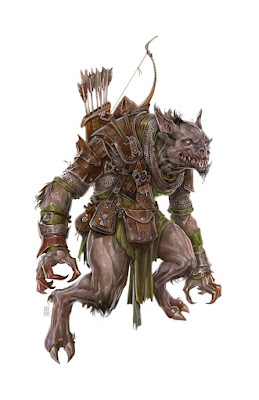 (Like this guy from Sandy Petersen's Cthulhu Mythos for Pathfinder, but more naked)

Sylvia charged the abomination, slicing at it with her sword and shield bashing it, while Martha slipped around and hit the monster over the head with her warhammer. Anna draws and fires her bow, but misses in her panic, while Delfee hurls a flask of holy water which shatters uselessly on the wall behind the creature. The humanoid thing slashes and tears at Sylvia wildly, quickly drawing several heavily bleeding wounds, and locking up her muscles unnaturally, causing paralysis. Martha tries to finish off the beast with a final swing, but trips on a bone lying on the floor, missing completely. Finally, Anna shoots the thing through the heart, killing it. Sylvia was paralyzed and near death, but through some first aid from Anna and holy healing courtesy of Delfee, she quickly recovers back to normal, her wounds supernaturally healed and the paralysis seeming to fade on its own. While Anna and Delfee tend to Sylvia's injuries, Martha nabs the dead monster's mask. 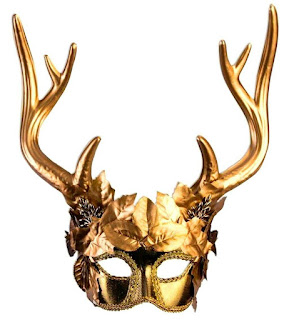 Posted by Tristan Tanner at 9:50 AM