The History of the Institute

The Volkov Institute is a top secret international organization founded in the early 20th century to investigate, contain, and eliminate supernatural phenomena. It is named after the little known scientist, Dr. Ivan Volkov, a Russian immigrant to England, who first conclusively proved the existence of other planes of existence in 1887, through a device later called the Volkov Resonator. The first test run went fine, with Volkov and his machine disappearing and reappearing a few minutes later with a violet glow. Volkov claimed to have been in a supernaturally beautiful meadow, full of flowers with "alien colors" and wonderful scents. A few months later, Volkov presented his invention to the Royal Society, and had prepared a demonstration. He did not survive. 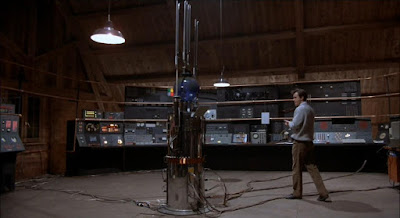 Dr. Volkov, upon describing what his invention did, was met with disbelief and mockery. He had anticipated this, and so asked for a volunteer from the audience to join him on a journey to another plane. An elderly professor, one Alfred Wimberly, raised his hand, and so Dr. Volkov and Dr. Wimberly touched the machine as it was activated, disappearing in a blaze of strange violet light. The machine didn't reappear for 31 years. In 1918, nearly 20 miles away from the original demonstration, Volkov, Wimberly, and the Resonator reappeared in the middle of a poor family's home. Wimberly rematerialized halfway through a wall, and died after a few seconds. Volkov survived the reappearance, but was horribly traumatized by his experience, often repeating phrases such as "It is creeping in the colors and lurking in the light" and "Its eyes are empty its bones are brittle and yet it sees and leaps across the thistles". He died 48 hours after he rematerialized, and an autopsy showed that the cause of death was spontaneous total organ failure, though no medical explanation for this failure would ever be attained.

After World War 1, a secret meeting of the league of nations occurred, with representatives from various nations discussing numerous anomalous events and mysteries which plagued their country, including the mysterious case of Dr. Ivan Volkov. Deciding it would be best if there was international cooperation towards the investigation and containment of such things, the council founded the Volkov Institute a year later in 1919.

You are agents of the Volkov Institute. According to the rest of the world, you are dead, your deaths faked by your respective governments and all traces of your existence wiped clean. In some circumstances, you may have even undergone cosmetic surgery to completely erase your former identity. You have sworn to defend humanity from the things that go bump in the night, the things which crawl just outside the thin walls of our reality.

You are nobody. You are the only thing standing between our world and extinction.

The Planes of Existence

What Dr. Volkov discovered in the 1880s was that all matter in the universe seemed to emit an odd sort of signal, detectable through complex instruments. Strangely, all matter emitted this signal at the same frequency, which seemed unusual to the doctor given the extreme variation of such materials. Volkov wondered what would happen if this frequency was raised or lowered, and began experimenting to create a device that would do just that. When he first tested what would someday be known as a Volkov Resonator, he was disappointed, as block of lead he used simply seemed to vanish into thin air, along with the machine. He presumed that it had simply been disintegrated, but only a few seconds later, the machine and the lead returned. It was soon apparent to Volkov that the matter was not destroyed, but moved to a state where he could no longer observe it.

All matter on a plane exists on a specific frequency. Matter of a one frequency cannot interact with matter on another, allowing multiple worlds to coexist with one another, overlapping but never touching. However, it is possible to change frequencies, to travel across worlds, and this sometimes even occurs naturally through strange storms which cause natural frequencies to change. Through these odd events, beings from Outside can come to our Earth. Most are confused, some are angry, but most are simply hungry.

Beings from other worlds that have been transported to our own begin to emit the same frequency of our own native matter, but there are faint irregularities in the signal that can be detected through a device known as a Baumann Reality Irregularity Detector, though most field agents simply call them Ghostfinders.

What The Institute Does

The Volkov Institute receives funding from almost every major country, and has access to a large pool of field operatives who, as far as the rest of the world is concerned, are either dead or never existed. There operatives are assigned into squads of about 4-6 members, and these squads are given assignments based on their capability and experience.

There are three main kinds of assignments: Investigation, Containment, and Extermination.

Investigation Assignments
In situations like this, the higher ups at the Institute don't know what is going on, and need data and information. These tend to be the most common form of assignments, and include things such as exploring a supposedly haunted location, attempting to discover the cause of a mysterious death, or responding to reports of a monster sighting.

Containment Assignments
Sometimes, an anomaly is too hard to permanently remove, or too useful to simply get rid of, and so containment is the only logical solution. In assignments like this, the agents are sent to contain the anomalous activity. This would include things like acquiring and locking up a cursed doll, capturing a monster, or making sure that an otherworldly location is blocked off.

Extermination Assignments
If a situation is free from potential civilian casualties, and the need to be discreet is no longer necessary, the Institute sends in extermination teams. Heavily armed, these units are sent in to destroy whatever anomaly they encounter.

Field agents are typically equipped with the following items.

In addition, agents are typically given a decent amount of cash, and some form of transportation.

Posted by Tristan Tanner at 1:43 PM