Hi I haven't posted in well over a month, anyway here is a city that is perfect for casual dungeon crawl games. This is part of a series of posts called Word Vomit, where I basically throw something together and only lightly edit it, to try and combat my writer's block. 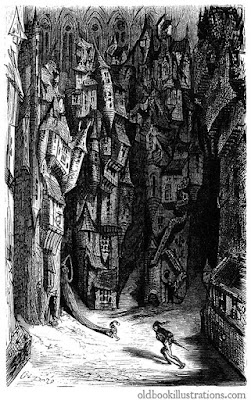 This place doesn't seem so much like it was built as it was grown, with chaotic and twisted spires extending up high into the sky, held up by makeshift supports and bridges connecting various buildings.  Those who are rich live in the upper levels of the city, high above the ground, above the filth and squalor below. The city makes its income thanks to the Ultradungeon, a huge network of millions of tunnels and rooms that extends for miles underneath the city. Strangely, it seems to constantly shifting and evolving, growing just as the city seems to have, and within its depths are countless treasures, both monetary and enchanted. Through this, the city stays afloat, and many cargo ships leave its port laden with gold, jewels, and various magical items. In return, the rest of the world supplies Dungeon City with food and other necessities. 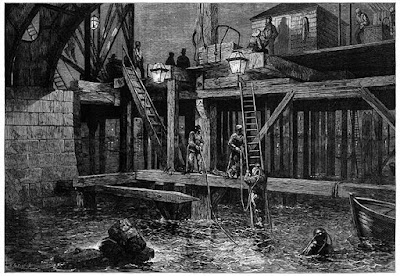 Adventuring is a way of life for the citizens of dungeon city, and almost everyone in the city works towards this profession in some fashion or another. Smiths to manufacture the armor and weapons, apothecaries to make salves and potions to heal the wounds of the adventurers, accountants to keep track of the profits, and morticians to take care of the corpses of the fallen. And at the top of the hierarchy are the bosses, former adventurers who, through their efforts, became rich, and now fund expeditions done by contractors. These bosses will claim to have worked hard to reach their current status, but in truth, most of them simply betrayed their party and got away with the riches, or were just the lucky ones who survived the Ultradungeon.

Generally, contracted dungeoneers are paid a small portion of the treasure they acquire, and are supplied with equipment by their employer. Parties are also accompanied by an agent of the boss that hired them, who is equipped with some form of magical communication, in order to alert the boss of any developments. Contracted dungeoneers are also magically shackled, so their employer can track them. These shackles are removed after the expedition is completed.

Bosses are infamously eccentric, with many adopting titles like “sharp tooth mike”, “pegleg pete” “Captain goldblood”, or “the stabinator”. Bosses vary in terms of whether or not they give adventurers an “allowance” for equipment, how much that allowance may be, if they supply the party with gear, who/what their agents are, what percentage of the money the party gets to keep, etc.

Culturally Dungeon City doesn't really care much about if you're different or not, as long as you are willing to brave the Ultradungeon or otherwise contribute to its exploitation. Inhabitants of Dungeon City range wildly in terms of species, ethnicity, gender, sexuality, religion, nationality, and political views. Dungeon City is fairly lawless, with no formal government, everything is essentially run by the various businesses built around the Ultradungeon. As a result, corruption is extremely common, organized crime runs rampant, and ethics are a joke. There have been many attempted revolutions and takeovers by multiple different political groups, but none of them have ever really stuck. At any given time, 2 or 3 people will be claiming to rule Dungeon City.

The monsters of the Ultradungeon are similarly varied, and many seem to have just been born from the very walls. Many intelligent monsters seem to worship the Ultradungeon as a sort of living god, and some citizens of dungeon city join cults that believe the same.
Posted by Tristan Tanner at 1:50 PM