Mad scientists are an easy source of adventure, and since I've been watching a lot of horror movies recently, I thought I'd come up with a random table of failed experiments, to serve as adventure seeds. These could easily be used for mad scientists or evil sorcerers. 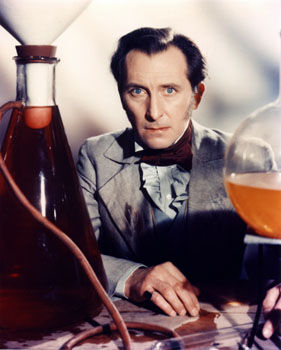 D66 Goals Of A Failed Experiment
11. To restore life to the dead.
12. To travel to the beginning of time and learn the mysteries of creation.
13. To travel to the future to learn the destiny of humanity.
14. To create new life from inanimate matter.
15. To create automatons to serve as slaves.
16. To develop a device to transport instantly across space.
21. To create a potion to provide immortality.
22. To transfer souls/minds between bodies.
23. To create an army of clones.
24. To give humans improved strength.
25. To give humans the ability to regenerate body parts.
26. To give humans the ability to turn invisible.
31. To determine the true cause of fear and weaponize it.
32. To allow humans to move things with their mind.
33. To allow humans to read other peoples' minds.
34. To restore youth to those who are old.
35. To grant humans the ability to see invisible things.
36. To cure a deadly disease.
41. To transplant a human brain into a mechanical body.
42. To graft body parts from other creatures on to human bodies.
43. To create a deadly disease as a form of biological warfare.
44. To learn the source of all magic.
45. To change one's appearance to permanently be perfectly beautiful.
46. To travel to another plane of existence.
51. To travel to another planet.
52. To contact a deity or being of similar power.
53. To bind a demonic entity into servitude.
54. To create an infinite food source.
55. To learn the source of evil.
56. To vastly increase humanity's intellect.
61. To replace fallible human organs with machines.
62. To create an endless supply of gold.
63. To ascend to godhood.
64. To travel back in time to prevent something from occurring.
65. To birth a child to one who is infertile.
66. To develop perfect mind control.

EDIT: Someone has already made a somewhat similar table to this, so feel free to check it out! This one deals more elaborately with immortality: https://osrdread.blogspot.com/2019/12/osrd66-mad-wizards-research-into.html
Posted by Tristan Tanner at 3:24 PM