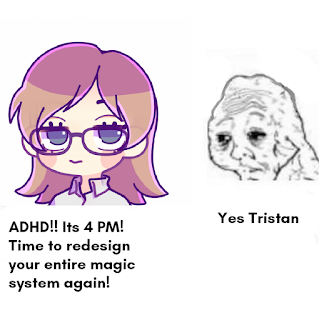 Click the image to check out the new version!
So I know literally only last month I redesigned the magic system, but I did it again. Not too much has changed, but there are now only 36 spells available, split into 6 elements of magic for the convenience of rolling randomly.

The bigger change is that I removed Prophets and Rogues from the class list. This is likely to be a controversial opinion, but here is my reasoning:

Prophets didn't really have a decent reason for existing, at least in that state. They were basically just Sorcerers shifted slightly to the left. This is already an issue for me with Dungeons and Dragons, and I just amplified it by allowing all classes to use any weapons/armor. Just having a Sorcerer with slightly different abilities didn't make much sense aside from forcing into the world an arbitrary separation of divine and arcane magic, which historically didn't really exist.

So now instead of Sorcerers and Prophets there are just good ol' Magic-Users.
Rogues are gone because the only reason thieves/rogues/specialists/whatever you want to call them exist is to provide skills which can be used outside of combat. Now, I have issues with having skill systems that can only be used with one class, since it inherently limits the actions of others! Once you have a class with explicit rules for picking pockets, members of any other class without that skill can no longer attempt it.

Since I already use a simple "roll d20 under your stat" system for non-combat challenges, it didn't really make sense for me to have an entire class dedicated to having better chances at those challenges. The only other feature of the class was that they could make sneak attacks, and realistically I realized anyone should be able to do that.

I also changed how stats work to be a little bit more simplified, with less penalties for lower stats as well. Someone with low stats will already have difficulty with challenge rolls, I figured its not worth it to penalize them much more than that.

So now, sneak attacks are a universal feature, there are no rogues, there are no prophets, and spells are more organized. I also took the liberty of extensively reducing in size the referee's section, as I began to get a headache from all of my own advice, and decided to cut it down to two pages.

Does this mean you can't play a traditional cleric-like character using ADHD? Absolutely not! As an example, I rolled up one down below: 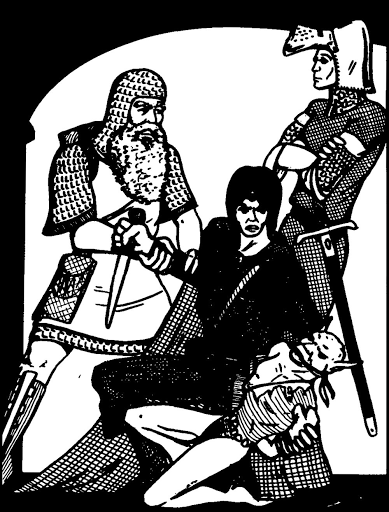