This is somewhat similar to my "scalable statblocks" post, but I wanted to go through my steps on how I create creatures nowadays.

I love monsters, they're among my favorite parts of role playing games. Making a monster, however, has always been a little difficult for me. I know there are no real "rules" to creating creatures in OSR games besides "going with your gut", but I've come up with a rough set of guidelines that I use.

Throughout this guide, I will use the notation "L" to denote the dungeon/adventure level that the monster is appearing on.

Lets say I'm trying to create a pale, crawling humanoid thing that evolved from humans but became monstrous and unintelligent after generations in the underworld, similar to the crawlers from the film "The Descent". 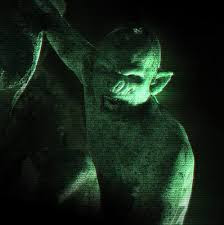 First I need to determine the Hit Dice of the monster, using the following chart. This also determines how many should appear at once.

The adventure I'm making is intended for a party of 2nd level characters, and I imagine these creatures are about as tough and as large as adult humans, so I give them 2 hit dice. I give monsters 1 attack for every 2 hit dice they have (rounding up), so the crawlers get 1 attack.

Next I need to determine their armor class. I decide that as an adaptation to living underground, they will have somewhat tough, leathery skin, so I give them an armor class equivalent to that of leather armor, thus they get an AC of 12.

I next want to determine how much damage they would deal, so I check the following chart.

I decide the crawlers have claws that are about as dangerous as a dagger, so I decide they deal 1d6 damage with their attack.

From here, I need to decide how fast they move. My system only has the movement speeds of "slow", "average", and "fast". I think that having them move quickly like a huntsman spider sounds creepiest, so I give them as "fast" movement speed.

The final step is determining any special abilities or weaknesses. I want them to be able to climb up sheer surfaces with ease, and to be vulnerable to bright lights. I note down that they can climb up walls and on ceilings, and that they take a -1 penalty to hit when exposed to bright light.

So now I've got a basic statblock that looks like this:

Cave Crawler
# Appearing: 2d6
Hit Dice: 2
Armor Class: 12
Attacks: 1 claw (1d6 damage)
Speed: fast
Special: can climb up walls and on ceilings, take a -1 penalty to hit when exposed to bright light.
I hope this has proved interesting to y'all!
Posted by Tristan Tanner at 5:04 PM