I love the main 3 monster manuals for AD&D (the Monster Manual, Fiend Folio, and Monster Manual II), they're aesthetically pleasing and to me have always set the standard for role playing game bestiaries.

I figured I'd read through them and review the monsters therein. I don't know how long I'll be doing this, but maybe this could become a daily post thing for a while.

I'll be starting out with the original Monster Manual, starting from the letter A. Each monster will get a rating out of 5 stars as well as a short explanation of why.

Aerial Servant
★★☆☆☆
Not off to a great start, the aerial servant always seemed kind of bland to me. That is to be expected, seeing as its one purpose is to be summoned as a servant by a cleric, but the fact that its an invisible air elemental which is routinely compared to the invisible stalker just makes it stink. It gets 2 stars instead of 1 star however, because I do think having clerics summon invisible elementals to carry their stuff is cool. 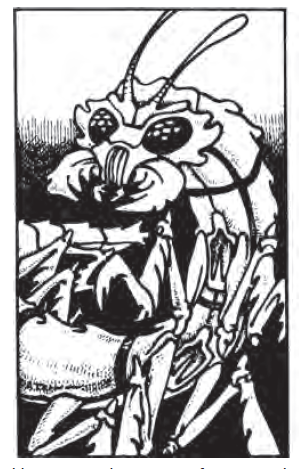 Anhkheg
★★★★☆
Anhkhegs are cool as hell, being basically giant weird centipede mantis critters which spit acid, and that is just plain awesome. They make great wilderness encounters, and it would be really easy to have a small little adventure where a farmer is terrorized by a group of these creatures. 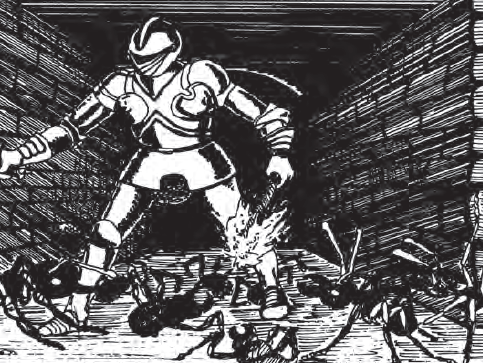 Giant Ants
★★★★☆
When I was a kid one of my favorite movies was Them!, which dealt with giant ants (though of a slightly larger size than the ones detailed here). Ever since then I've had a soft spot for these guys. However, at the end of the day they're just bigger versions of a real animal, so I can't give them a 5/5 stars.
Ape (Gorilla)
★☆☆☆☆
Literally just a real animal, useful but not what I come a monster manual for. 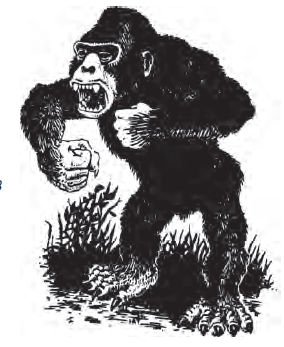 Carnivorous Apes
★★★☆☆
Why do Carnivorous Apes get 3/5 stars when gorillas get only 1? Because intelligent/semi-intelligent flesh eating apes are a cool swords and sorcery trope, and I really dig having them around. However, they're not quite as flavorful as, say, Moldvay Basic's White Apes.

Axe Beak
★★☆☆☆
Basically just a gastornis. Not that interesting, but I do like the name and think they could be useful for a lost world setting, so they get 2/5 stars.
Babboon
★☆☆☆☆
Another normal animal.
Badger
★☆☆☆☆
ANOTHER NORMAL ANIMAL
Balluchitherium
★★☆☆☆
Another normal animal but it gets a slight pass because its a prehistoric rhinoceros.
Barracuda
★☆☆☆☆
Not only is this fishy bastard a normal animal, its also an aquatic creature, meaning I will never get any use out of it.

Basilisk
★★★★☆
A good classic creature from mythology. I really really like the illustration for this guy, as well as the information on how it moves. I wish more information on its habitat and behavior was in its description though.
Bear
★★★☆☆
Now you might be asking, "Tristan why are you giving bears 3 stars, they're just animals?!" and while I agree that it is a little annoying to see another mundane critter in what is supposed to be a manual of monsters, I find that 1) bears are terrifying, and 2) their stats are useful as a benchmark for nasty predatory creatures.

Giant Beaver
★☆☆☆☆
Fuck you Gygax
Giant Beetle
★★★☆☆
Giant beetles are good, old fashioned, useful critters. It makes sense why they're in the dungeon, there are multiple varieties of them, and fire beetles give some useful loot for beginning adventurers! They're not the most interesting critters, but they are cool. 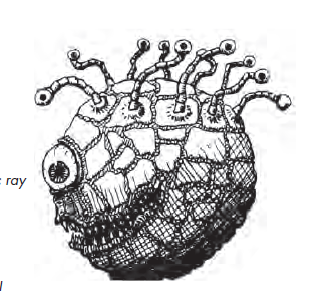 Beholder
★★★★★
Hell yeah!!! Beholders are great! Evil floating orbs with tons of eyes and magical abilities?? Sign me up! They're a little complicated mechanically but conceptually they are golden, and I love that. First 5/5 monster in the book.

Black Pudding
★★★★☆
Shoggoths are cool and black puddings are basically off-brand shoggoths, which I can appreciate. Ooze monsters in general are just so iconic to D&D and so interesting to deal with, and black puddings are no exception.
Blink Dog
★★★☆☆
They're not bad per se but I just don't really know what to do with them? Also its weird that they're listed as intelligent but there is a suggestion of how much trained blink dog puppies would cost if sold.
Boar
★★★☆☆
Another mundane animal I actually kind of like, boars are scary as hell and also the prehistoric ones are listed here as a subtype, which is always a plus. This entry reminds me of the Wicked Tinkers song "The Hog". 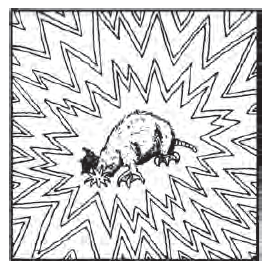 Brain Mole
★★☆☆☆
I will never use this monster in all likelihood, since it uses psionic mechanics and those suck, but the illustration is so endearing and silly that I can't give it 1/5 stars. 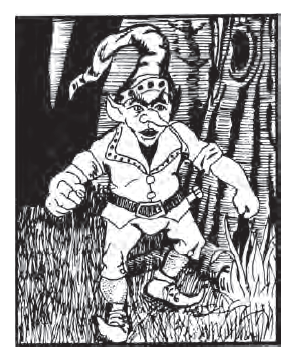 Brownie
★★☆☆☆
Another monster I don't really know what to do with, and also their illustration is just... incredibly bad. Also I have no idea why their armor class is equivalent to plate mail.
Buffalo
★☆☆☆☆
*Sigh*

Bugbear
★★★★☆
Bugbears rule, I love the concept of these huge, tough goblins who are super sneaky and quiet. Its scary and makes them unique in a way that a lot of other humanoid type monsters just aren't. Also I love bogeymen archetypes. 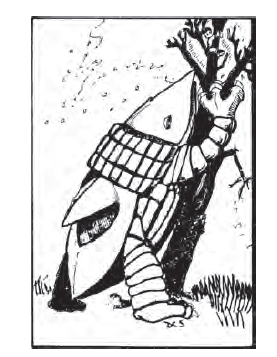 Bulette
★★★★★
Bulettes get 5 stars, which is a little weird considering how I've rarely even given them thought until now, but they deserve it. Their appearance is based off of a plastic dinosaur toy, their description says they are a hybrid of armadillos and snapping turtles with demonic blood, and they are the natural predators of halflings. They're so unique and interesting, I love them.
Bull
★☆☆☆☆
I swear to god can we just have like, a generic table of mundane animal stats? Its a little ridiculous how many normal animals are in the first monster manual.
Well that's all for this post, tomorrow I'll be going over some more. Hopefully I can keep up enough steam to review every monster from the Monster Manual, Fiend Folio, and Monster Manual II. Thank you for reading!
Posted by Tristan Tanner at 12:32 PM