Things have been happening and I've been too lazy to work on this, but here we are finally with part 4! 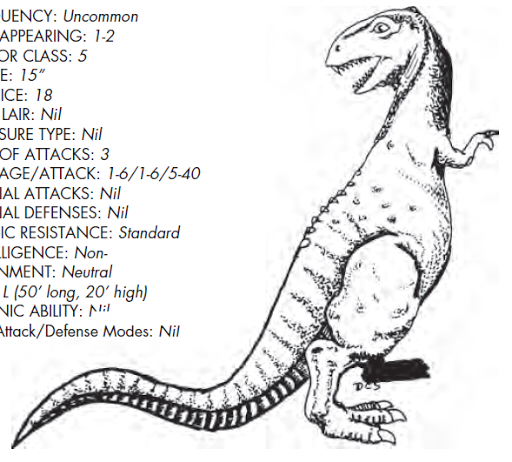 Dinosaurs (Yep, All Of 'Em)
★★★☆☆
Three stars for dinosaurs may seem a little harsh, but mainly this is just a personal gripe with how they are laid out. Dinosaurs are objectively cool, especially the scientifically inaccurate big lizard fellas depicted in the Monster Manual. However, the fact that they are all labeled by their scientific names, the fact that few of them actually have illustrations, their obscenely large numbers of hit dice, and the relative redundancy of having so many similar species listed, all makes my opinion of these entries go down significantly. I would use dinosaurs in my game, and I might pick and choose a few from here, but this isn't how I would go about it. 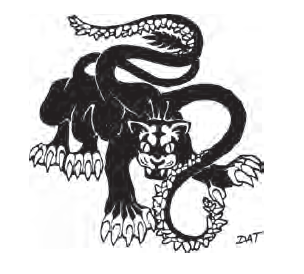 Displacer Beast
★★★☆☆
These critters are interesting, I've actually read the story that inspired their physical appearance, and honestly I think these are slightly more neat than the coeurls that inspired them. However, they don't really fit with my home setting, though they could be encountered in the wilderness of Lost Carcosa. This is really a case of "neat concept, but I personally wouldn't use it" so I only give them 3 stars. 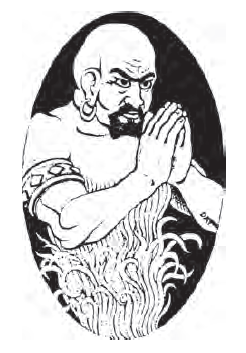 Djinni
★★☆☆☆
I don't really know that much about Middle Eastern mythology, so I can't really argue how accurate the depiction of djinn in the Monster Manual is, but they just really don't seem like my cup of tea. Elemental creatures already don't float my boat, and chaotic good pseudo-wish granting ones just aren't that interesting to me.
Dog
★☆☆☆☆
Useful creature stats but also come on Gygax please just have a mundane animal table.
Dolphins
★☆☆☆☆
Again, just a real animal, but here is a weird thing: their intelligence is listed as "very", which is above the average human intelligence. I have no idea if this was intentional or not.

Doppelganger
★★★★☆
I love Doppelgangers, they're such an interesting creature, but they are unfortunately somewhat difficult to run, at least with PCs being imitated. They work great if you have hirelings though. Also I absolutely love their illustration. 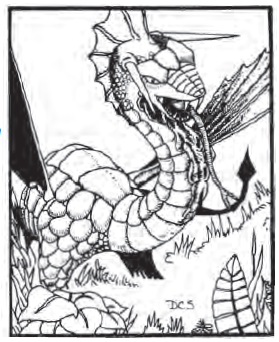 Black Dragon
★★★★☆
I can dig cave/swamp dwelling dragons that spit acid, that sounds awesome! It certainly helps that these critters' illustration looks like a snake of some kind. 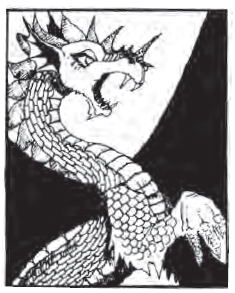 Blue Dragon
★★☆☆☆
Out of all the chromatic dragons, blue dragons are the most boring to me. I do find it interesting that they dwell in deserts, and spitting lightning is appropriately intimidating, especially if there is a loud thunderclap whenever they use their breath weapon. But something about them just doesn't click with me. 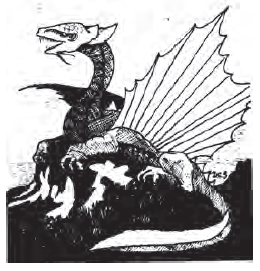 Every Metallic Dragon
★☆☆☆☆
I don't get why there need to be "good" and "evil" dragons, especially since these dragons are mostly based off of European mythology (some aspects of gold dragons give off vibes similar to the lungs/longs of Chinese mythology). It just seems unnecessary for them to exist except 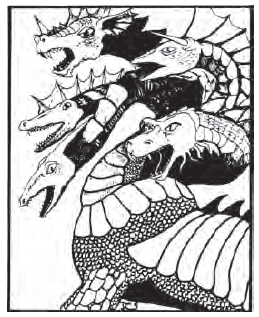 Chromatic Dragon (Tiamat)
★★☆☆☆
An evil goddess of dragons with the heads of each of the different types is interesting conceptually, I just don't know why Gygax tied her to the Mesopotamian deity Tiamat. Like I'd give her a 3 out of 5 if it wasn't for the meaningless connection to the mythological deity. 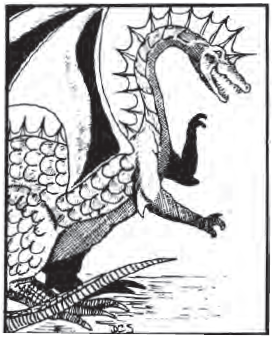 Green Dragon
★★★☆☆
This is a solid dragon, I can get behind a poison spewing green bat-lizard that lurks in forests. The medieval venomous aspect of dragons is often overlooked in my opinion. It is kind of weird to me that the poison is specified as chlorine though 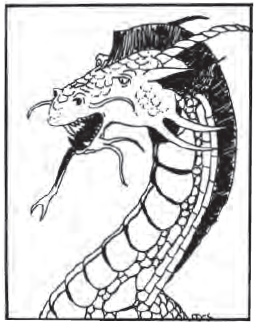 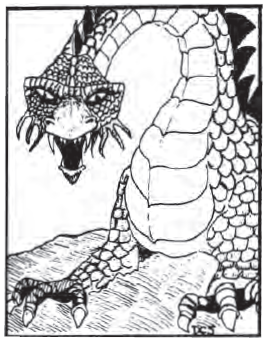 Red Dragon
★★★★★
I was going to give these fellas a 4/5, but then I had a vivid memory of my father reading me the Hobbit for the first time, and remembered the wonder and terror I felt at hearing of Smaug sniffing out Bilbo beneath the Lonely Mountain. Fire breathing, winged dragons are just such an absolute staple of fantasy that I can't rightfully give this creature anything less than a perfect score. 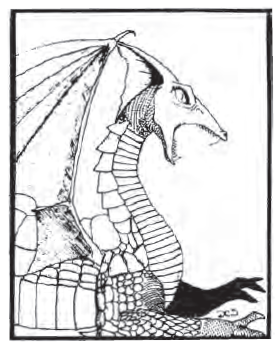 White Dragon
★★★☆☆
Not the coolest of dragons by far, but it gives off this weird viking feel that I appreciate and can't quite put into words. Also, the illustration reminds me of the gyaos from the Gamera series.
Dragonne
★☆☆☆☆
I had to google the origin of the word "dragonne" and it literally is just the feminine French version of the word dragon. I have no idea why Gygax just took a word meaning "lady dragon" and decided its an all new species of dragon with the head of a male lion. I also can't see any real reason why this creature needed to exist. 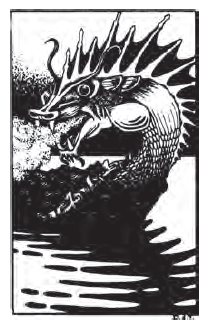 Dragon Turtle
★★★☆☆
I like dragon turtles because they remind me of the legend of sailors going onto an island, starting a fire, and then realizing to their horror that it is the back of a sea monster. It would make for an interesting encounter in a pirate-styled game, and the fact that they breath clouds of steam is interesting. However, they are aquatic creatures, so I have little use for them in my mostly dungeon/wilderness exploration home games. 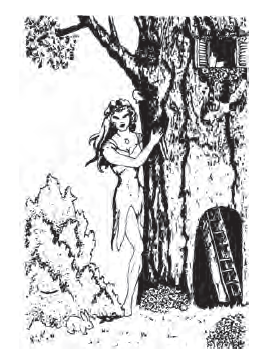 Dryad
★★★☆☆
Though based off of a Greek creature, the dryads of D&D give off such wonderful faerie vibes to me. I especially like the detail that they will charm and steal away men only if they have a charisma of 16 or higher, it adds a lot that these beings don't steal away people for any need of sustenance, but just because they think they're hot. I love the fact that 50% of those stolen never return, and those that do only return in 1-4 years. 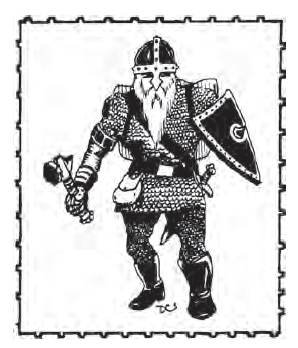 Dwarf
★★★☆☆
I may be giving dwarves a little too much credit with 3/5 stars, but once again my love for The Hobbit takes over. The illustration is nice, and the description of dwarf clans being competitive but not hostile makes for interesting worldbuilding. However, I dislike that they have a universal alignment of "Lawful Good", their culture is barely given any shred of explanation, and I hardly feel that there needs to be a distinction between regular dwarves and mountain dwarves. Also, while I'm complaining, why can only NPC dwarves be clerics in AD&D 1e???

Anyway, sorry for the delay in this post, I've been busy with work, a game of Adventuring in Distressingly Hazardous Dungeons run over Discord, writing a story for the Bogleech Creepypasta Potluck (which you can read HERE), reading the Simon Necronomicon, and watching through Supernatural with my spouse.
Next time: Monsters starting with the letter E!!
Posted by Tristan Tanner at 10:08 AM