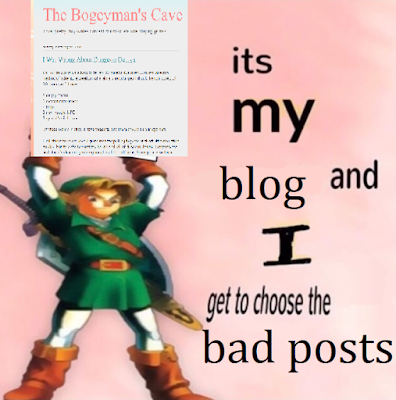 I haven't been posting recently, partially because I've been re-evaluating some philosophies of mine in relation to role playing games. I'm gonna outline what these changes are real quick and how I plan to incorporate them into my works.

The Players' Levels Change, Not The World's

I used to be a weirdly firm believer in balance, and that monsters, traps, treasures, etc. should be balanced to the PCs. But the world doesn't work like that. If the level 1 adventurers decide to face off against the Archdemon Scolendra, Queen of Vermin, they're all going to die. I've decided I'm going to extend that philosophy to dungeon design as well, and stop caring so much about balanced encounters and scaling monsters to suit the party. Obviously in a megadungeon deeper levels will still be more dangerous and hold more treasure, but I'm not going to worry about the exact specifics of what that means. I'm going to try to go with my gut.

I've had a home setting, the world of Visterra, that I've been working on on and off for a few years, but the scope keeps being way too much for me. I have so many places I want to detail and it all becomes too much. Certain areas are more detailed than others, and its all just a big mess, and as my interests change so do my desires for what I want the setting to be. So, I've decided I should fragment it.

My dark fantasy setting featuring cultists and otherworldly monstrosities plaguing the crumbling ruins of a fallen Empire is now called Velonia.
My pulp inspired jungle inhabited by serpent-folk sorcerers, cavemen, and scientifically inaccurate dinosaurs is now called the Forgotten Island.
My folk horror setting of barghests, redcaps, hags, and woodwose terrorizing small villages in a land inspired by the British isles is now called Avilion.
And of course I've already posted about the Silent Hill/Ravenloft inspired setting of Raven Hill.
These settings were once all part of a larger setting called Visterra, which I've decided I'm going to kill for its own good. My ADHD addled mind isn't fully capable of dealing with a large setting featuring so many different tones and themes. Its much easier to sort things into smaller, bite sized pieces.

I'm going to be applying this philosophy to dungeon creation as well, making small, highly themed dungeons. If I do make a megadungeon (which I have plans to do), it will be more like several small dungeons linked together, not massive dungeon levels.
I hope that with this philosophy I can prevent burnout.

Focus On The Fun

I want to create and referee things which I find enjoyable, and what I find enjoyable are cool monsters, weird NPCs, interesting traps, and strange magic items. I'm very much a dungeon crawl kind of guy, and I should focus on that style of game because it makes me happy. I know that dungeon crawls have somewhat fallen out of style in the RPG community as a whole, even to a certain extent in the OSR, but screw it, that's what I like.
Hopefully I'll be making some more posts soon! (Like finally working more on the Monster Manual Review).

Posted by Tristan Tanner at 4:19 PM